I've just returned from a great week guiding ice routes in Aurlandsdalen Norway. I was working on a course ran by Martin Moran based from the idyllic sleepy village of Aurland. Aurlandsdalen is the lesser known brother of Hemesdal and Laerdal, two more established ice climbing areas in Western Norway. Martin has been guiding in this area for almost 10 years, and has had the place more or less to himself for that time. Before heading out i'd attempted to wrap my head around the lie of the land and route options by reading Martin's pdf guide he's written to the area (and to my knowledge the only documented info), but in the end i gave up as the vastness of the place became apparent.

It's really intimidating going to a new area completely on sight in a guiding role. Not having a library of routes and options in one's head, or knowing the recent snow pack or ice history makes everything feel very "big" when you have two inexperienced yet eager clients in tow. Fortunately, as is often the case, there was nothing to worry about and the general trend for the week was to drive up a valley staring up at huge streaks of ice in wonder, settle on an appropriate one for the day, beat a track up to the base and climb it. Only once in the whole week did i know what route i was climbing, in fact for all we knew we were the first! - a great adventurous way of doing things. I'm sure that this combined with the fact that we didn't see any other climbers all week is why Martin loves to come back every year.

I was lucky enough to be partnered with Dawn and Raymond, who were super strong and keen, allowing us to barely climb anything easier than WI5 all week. 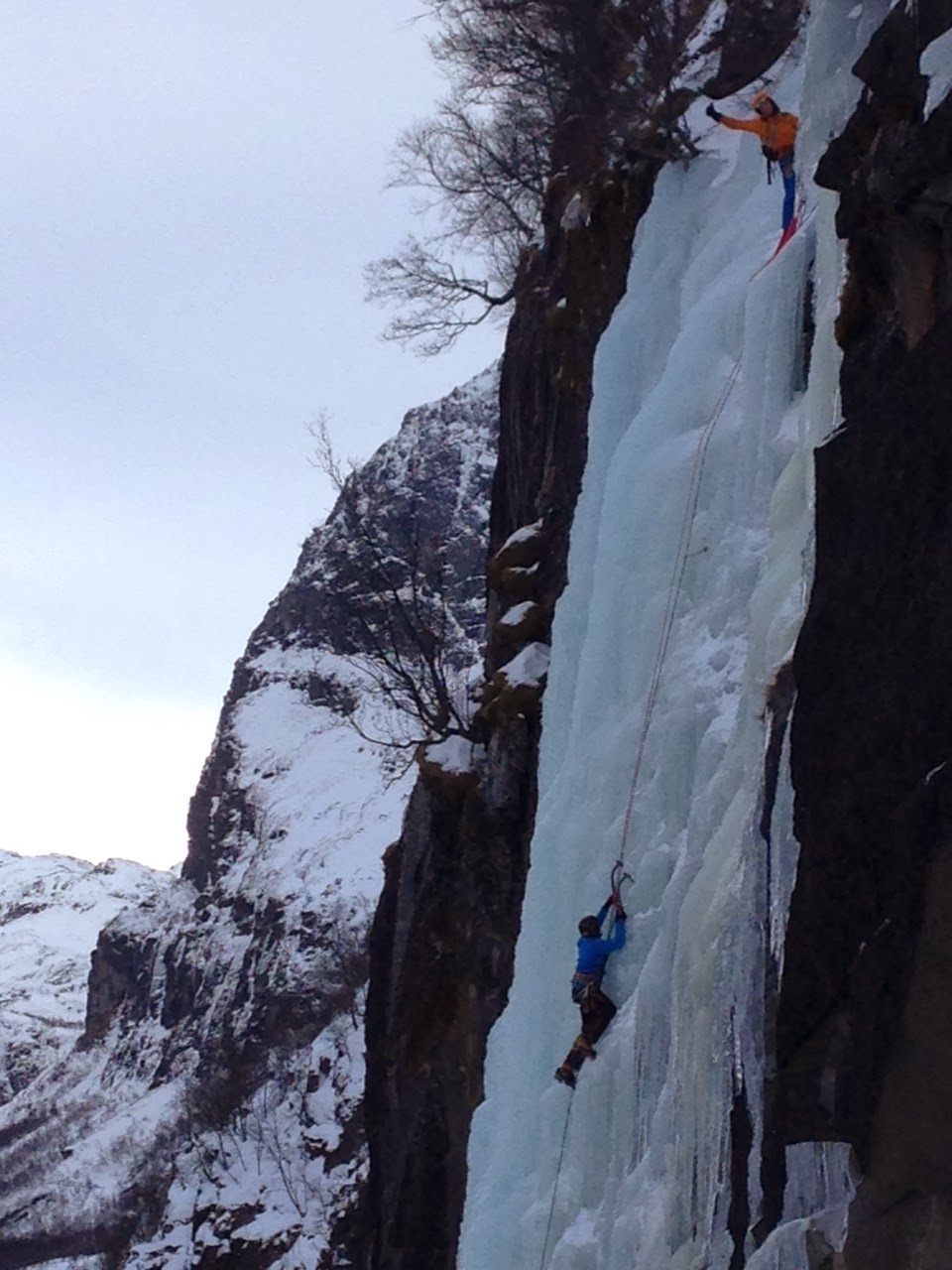 Back in Scotland now, and after two days of light winds, we once again have 70mph south westerlies, and MWIS is back to using words such as "buffeting effect" "torturous" and "gael force" to describe the next week. Yipee.
Posted by Will Sim at 9:37 AM No comments:

Last week I was hosting on the BMC winter international meet. The international meet is a week of none-stop climbing, when you take a foreign guest out to show them just how good Scotland can be. It was a really fun week with a real buzz and excited atmosphere, with everyone's ideas and motivation bouncing off each other resulting in a frenzy of action.

With apocalyptic-like weather forecast for the first day of the week, there were very few decent options for easing in to it. My Canadian partner Michelle Kadatz was extremely jet-lagged after only arriving late the evening before, so a late start was in order. Unfortunately, Michelle had ate something dodgy in the airport so had been up all night with food poisoning. We managed to get to the bottom of our intended route in the norries, despite the 80mph winds, but in the end we had to retire back to the lodge, so that Michelle could be nearer a toilet and a bed!

10 of us piled in to a mini bus at 5a.m. and headed for Glencoe. We climbed Nick and Guy's line "Slenderhead" VIII 8. This was the second ascent, and Michelle's first route in Scotland, she was obviously feeling a lot better as she followed the three pitches with style perfected on the flat edges and shallow hooks of Canadian limestone.

A less than perfect, but temptingly ok forecast lured us to Beinn Eighe on Wednesday. After a very late start in ferocious winds we battled over the summit ridge and made the two committing abseils down "Blood Sweat and Frozen Tears". From watching the conditions over the last couple of months i had a sneaking suspicion that the legendary and very rarely repeated Mick Fowler route "West Central Gully" may be in good condition. This mysterious route sports a 5 metre roof section on its amazingly steep crux pitch. Fowler famously attached his rucsac straps to his axe leashes so he could rest when making the first ascent. And other such comments such as "the grade is a guess, the second ascencionists refused to comment" certainly ad to to the mystique.


The route was wild, with 3 metre long icicles hanging from the roof, not thick enough for body weight, Michelle sheltered under a roof at her belay while i sculpted them in to a climbable state. At the belay after the crux pitch i was buzzing, what a route, seriously special.

For the second part of the week i was to climb with my Swedish Friend Olov Isaksson. I've known Olov for several years, but we'd somehow never managed to climb together.
We headed back to Beinn Eighe and its "Far East Wall". This steep, super compact wall is an amazing place, and within seconds of arriving at the base we spotted an awesome looking unclimbed roof crack and corner system that we simply had to have a go at. Surprisingly, the line went with little drama in three pitches, with the crux at about VII or VIII 9 which Olov made a great lead of.


Sadly our good friend Magnus Kastengren, who had introduced me to Olov 4 years ago, died in the mountains back in November. We talked a lot about Magnus that day on Beinn Eighe and decided to name the route "Crazy Eyes", which will make sense for those of you who were lucky enough to have met Magnus.

We finished by soloing West Buttress. It was one of those really great days.

Rest day. The weather was worse than grim, and we discovered the sauna in Glenmore Lodge.

The forecast for Saturday wasn't great, but we hoped that MWIS was being pessimistic and headed over to Beinn Bhan with Andy and Peter. On arriving at about 6.30 a.m. it was chucking down rain and just didn't seem hopeful for getting something big done. We all went to sleep in the car and woke up an hour or so later to considerably improved skies. Game on!

It went like a dream, and six hours after starting we'd topped out and were halfway back to the car before we needed our head torches.

It was a really good week, many thanks to the BMC for having me along, and Michelle and Olov for being great partners.