News is just filtering through of the death of Joe Puryear in Tibet. Noone knows for sure what happened as of yet, but it seems that he fell through a cornice of some sort, unroped and away from his partner.
I never met the guy, but his and Mark Westman's fantastic photo's of hard iconic Alaskan climbs (of which they seem to have done all of), are partly what made me want to go to Alaska in the first place.
A case of a talented and phenomenally experienced climber "fucking up" in a simple way, not for the first or last time. Although i have been aware of cases such as these happening ever since i got in to climbing, and even after having had a good friend die from a similarly "stupid" error, i don't think i'll ever stop finding it scary.....
Posted by Will Sim at 11:45 AM No comments:

Some of the best days are completely unexpected....... It was about 11.30 and we were just about to order more beers, when Jon walked through the door of Elevation. He promptly told me that through the power of facebook he'd heard the "Carrington-Rouse" had been done. I'd never seen the route in condition before so it wasn't a hard call to make.
A quick packing session, short sleep and early start later we caught a delayed first lift up the midi. The usually rapid approach took far longer than usual as all the morraine was covered in 30 cm of annoying powder. In fact the approach took so long we only started up the route at 11.30 am.
To gain the initial ramps we climbed directly under the towering serac which threatens the first rope length. Although not ideal, at the moment the safe start is very dry and due to the time of year much longer than it would be in the winter months.
This is followed by a beautiful twisting gully up to about 85 degrees, then about 7 pitches (we moved together a bit also), of the most pleasing ice smears on the best of Chamonix granite. 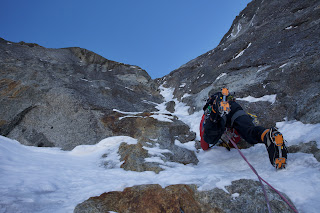 Altogether a great route, very much an "Aguilles" style outing i.e. not big or serious but good fun. 5 hours up 3 down. Get on it!
Posted by Will Sim at 12:24 PM No comments:

Work and a little play.

Just back from a few days working for a friend in the Verdon Gorge. I'd never been to the Verdon before and was even more impressed than I expected to be. Beautiful plum vertical limestone with insane exposure and brilliant technical face climbing. I was working as an extra hand doing general rigging jobs on a catalogue photoshoot. But i did manage to sneak in one route for myself, between jugging up lines and being shouted at by Mr boss.

Yesterday Jon Griffith and myself made an attempt on one of the harder wintery routes on the North face of the Jorasses. This route is a big step up from the routes i've climbed on the face so far. A friend had expressed his opinion that he thought there was not enough ice this year to make it do-able. However, after a lot of thought we decided that providing we could cross some easy angled (and usually ice encrusted) slabs low on the route, the rest wouldn't be too conditions dependent.
Amazingly, we bumped in to Patrick Pessi in the Leschaux refuge- one of the few people to have completed the route. He seemed to think that these slabs would be the crucial part in current conditions. He wasn't wrong! after a very early start we reached the slabs and i spent almost 2 hours going about 20 metres on rediculously easy angled terrain, with no gear and poorly formed thin snow/ice. It was all a little frustrating, as when the face is in really good nick, i reckon you'd be moving together or soloing this without batting an eye lid.


After v-threading off and over the schrund we were already planning a second attempt. I think we've found a way to out flank the slabs on the far right then cut in.
Time's running out with Montenver shutting on Sunday.......
Posted by Will Sim at 5:31 AM No comments: