The Cure and The Tempest

The first 10 days of 2014 saw me feeling completely wiped out by a chest infection. I should have known better....after feeling the oncoming illness a few days before christmas i didn't help matters by going a bit nocturnal over the festive period and spending too much time in pubs back home, but hey, some things you just have to do.

After a course of Antibiotics and eating a full clove of garlic every day for a week (my mate Ben told me it would work, and he went to university), i was starting to feel back to normal in time for a lull in the horrendous winds.
The week before, myself and Greg had tried something hard and new on the Dubh Loch. Although we didn't get very far, the amount of ice about had inspired us to come back asap.

Asap turned out to be a week later, when on Saturday, Guy Robertson, Greg, Nick Bullock and myself returned on the day that was to be a new-routing extravaganza.

At the bottom of Broad Terrace Wall that morning there was a great atmosphere, with most of the protagonists of Dubh Loch climbing over the last 30 years present, craning their necks and marveling at the sheets of thin ice traipsing down the crag.


With Guy and Greg already involved in the first pitch of the best new line to go on this part of the face (what would become "Defence of the Realm"), Nick and myself started trying to spie an aesthetic line up the blank looking wall to their right. I absolutely love this part of climbing a new route, its an opportunity to be creative. Ideally we wanted it to be hard enough that we would have to fight a little, not so hard that we'd run in to a dead end, and follow an aesthetic, strong line packed with quality climbing.

I started up a steep corner line with some tricky pulls to a good rest. From here, a curtain of ice was three metres to my right. It was going to be a super thin bit of climbing off a very small boss of slopey granite with no feet holds to reach a crack and then the ice. After getting some bomber gear at my head height, i committed to the move, matching on a hook that could pop at any second. Luckily it stuck just long enough for me to teeter on to the good ice.
After getting a bomber belay another 20 metres higher, and with the technical crux of the route out of the way, i brought Nick up the pitch, and handed the lead over to him. Nick then took us to the top in two brilliant pitches of ice, thin places, steep and fat in others. It really is a pleasure to watch Nick on this kind of ground, i think you'd be hard stretched to find someone more at home on thin ice.


After a rest day, the same team - Nick, Guy, Greg and myself met at the King's house pub a the head of Glencoe, with our eyes set on Stob Coire Nan Lochain. Totally still in the morning, it was the first time this winter i could actually call the weather "nice".
Greg and myself had a quick play on a great looking new line, which will one day provide two very hard, impressive pitches. After retreating, we went to check out the Tempest and i got stuck in. The climbing was hard and fairly well protected for half of the pitch, but felt intimidating, not knowing anything about it. There was a lot of clearing of iced ledges, edges and cracks, and combined with making a few hard moves the wrong way at about half height, which i had to reverse meant that my arms were feeling pretty weiry by the time i got to the niche at two thirds height.
I kind of realised at this point that i wouldn't get any worthwhile gear from then on, so hammered home a bomber wire and committed to the final section. The very last pull over the snowy bulge at the lip was a bit heart-in-mouth, with a long long fall on the cards. After abseiling off, Greg also led the pitch on my gear.
It really is a fantastic pitch, and will be a classic in the future i'm sure. 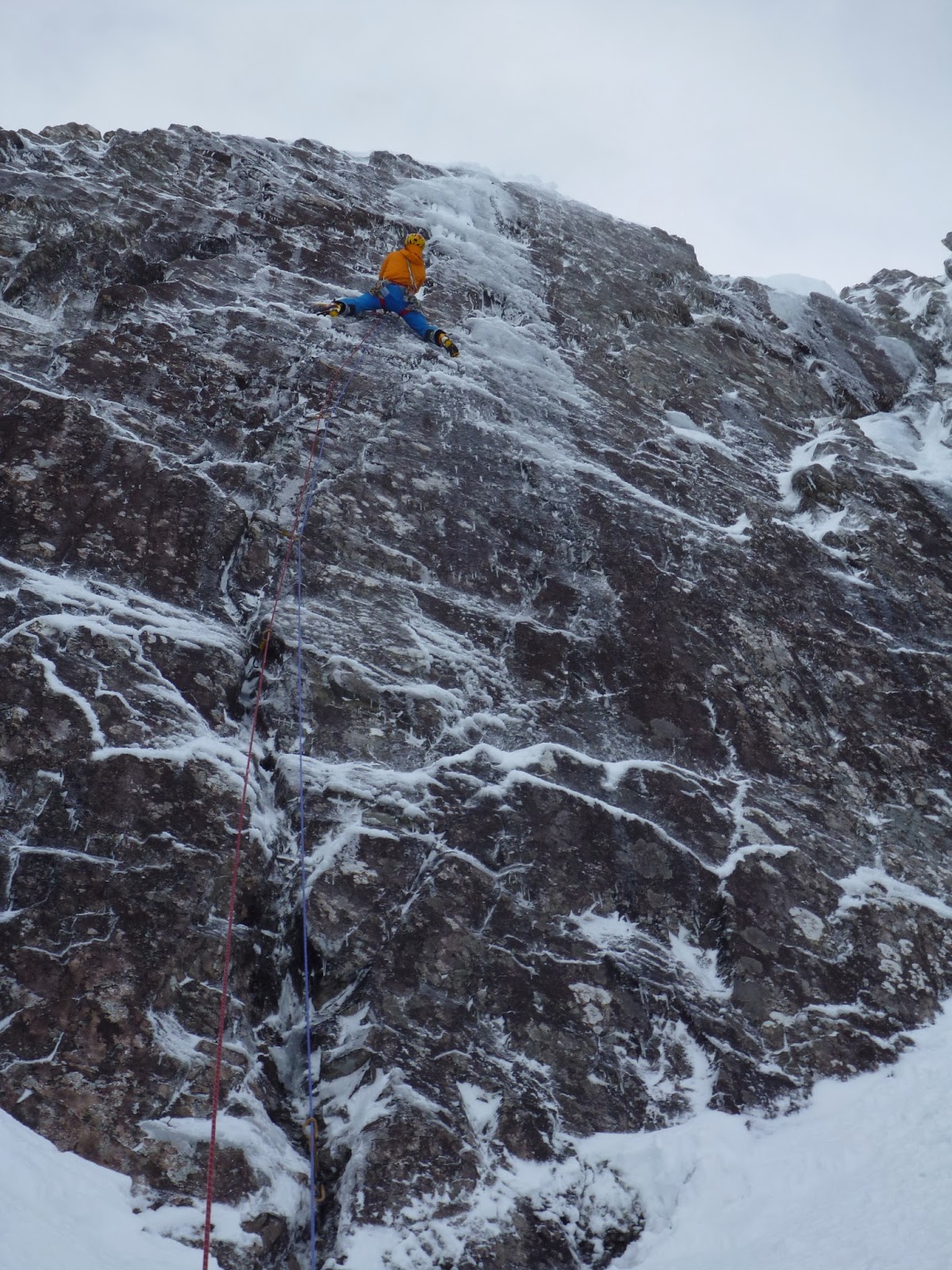