Just off the mountain, Colin has written an excellent, summary of his and Nils' trip, and also a general summary of activities in the range this season. Check it out- http://www.colinhaley.blogspot.com/ . I especially like his suggestion of using the native Athabascan names for all the peaks in Alaska, like thats gonna catch on!!......
Posted by Will Sim at 8:18 AM No comments:

I've just returned from a semi-successful trip to the Central Alaska range with Jon Griffith, and our Chamonix-based swedish friends Magnus Kastengren and Andreas Fransson, who had big skiing plans. Although we didn't manage to set foot on the main event, we had an awesome time with lots of friends and did some great climbing.
So firstly, a general synopsis: We arrived on the Kahiltna Glacier on the 8th of May. 5 days of good weather allowed us to get established at the 14,400ft (4400m) camp, this took 4 days, double carrying on the last day, between the 11000 and 14000 camp. We then set to work gently acclimatising by making regular forays up to 17000 feet via the west buttress, the "rescue couloir" and the west rib cut-off. We then had enforced inactivity for about 5 days due to poor weather, 2 of these days were spent tent-bound.

Afer this weather passed we made an ascent of Denali via the west buttress, by-passing the 17000ft camp and making it to the summit from 14000 in 6 hours. We then climbed the upper west rib to the football field. The final component of our acclimatisation was an ascent of the Cassin ridge. We climbed the route in a single push (14 hours 40 minutes) then descended down to the 14000ft camp.
At this point we felt ready to launch on to our main objective, but we needed the weather. After a few rest days we decided to descend to base camp in poor weather. From here we could launch on to our objective on the South face of Denali, or if a window not large enough appeared we could try our back-up plan on Foraker. Unfortunately the weather steadily deteriorated from this point, with one low pressure after another rolling over the range. After a talk with Mark Westman who was watching weather charts from his home in Talkeetna, we made the decision to get out of the range as the weather was nowhere near stable enough to try anything and to wait much longer would jeopardise catching our flight out of Anchorage later in the week.

﻿
Feeling the strain after Cassin single-push. from William Sim on
Vimeo.

After our ascent of the Cassin, we spent a day or two recovering. We were both pretty knackered, but more annoyingly i had some frostnipped toes. I've never suffered badly from cold injuries in the past as i'm really lucky and have good circulation. The night was cold on the Cassin, probably about -25, but normally this would have been ok. However, with the combination of very wet feet from the approach down the Seattle ramp and about 1 litre to drink on the whole route, (i'd normally hope to drink about 5), i think my feet were just much more susceptible.
This was however more of an annoyance rather than a stopping factor. We made the decision to relocate to the airstrip from where we could base ourselves for the main event, a different line on the south face. The weather through this period was one low pressure after another. Warm and wet, with snow falling lightly from 14000 and below. After a couple of days we began to realise that if the forecast was remotely right for the next week, we didn't have the time to do our south face objective and make our flight out of Anchorage on the 13th of June. We couldn't miss this flight as Jon had to be at his sister's wedding on the 15th.
After the time window we required had become unattainable, we transfered our psyche on to our objective on Foraker. For me, and i think i speak for Jon also, this was the most unpleasant part of the trip. We spent day after day worshipping the latest weather forecast and thinking hard about what Foraker would be like. I hated not knowing what we'd be doing in the immediate future. While this was the case higher up on Denali, it was bearable as it was early in the trip, and everything was gearing towards acclimatisation and just hanging out high up.
After a chat with Mark Westman over sat phone, who was studying weather charts from his place in Talkeetna, we made the decision to pack up and get on the list of climbers (some of which had been waiting 6 days to fly due to weather) waiting for a plane. The weather was forecast to continue with back to back lows with one day of nice weather in the next week. Marks interpretation of the weather charts backed this up, which made it a relatively pain-free decision in the end.
We made it out of the range that afternoon in a Beaver ski plane with just minutes to spare. Our pilot had just informed us that he may have to do an about turn back to the airstrip, when a cloud thinned just enough for him to see the other side of a pass, and then out we went, in to the beautiful green wilderness that stretches between the mountains and Talkeetna. A minute later we heard Lisa at basecamp shut down all air traffic as the weather worsened.
Although we both had that lingering unsatisfied feeling in our hearts, we were both excited about burgers, showers and the drunken mayhem that was about to commence!
﻿﻿
Jon Griffith Chugach spring skiing. from William Sim on Vimeo.

The Cassin, the record and etc.'s
As has been reported on various websites, we climbed the Cassin 20 minutes faster than the previous speed record. We had not intended to do this and we didn't even realise we had when we topped out, (we were unsure of the exact record). The record was Mugs Stump in 1991, 15 hours bottom to top, and 27.30 from 14 back to 14. Our times were 14.40 bottom to top and 22 hours round trip from 14. The specifics of each ascent vary a bit: From what i understand Mugs had a track the majority of the way up the route. We had a track as far as the first rockband (first thirdish??) thanks to Andreas and Magnus who made a two day ascent on either side of our ascent. Mugs approached by skiing and downclimbing the west rib. Jon and myself approached by downclimbing the Seattle ramp. I think the Seattle ramp is the faster of the approaches if you get it right (was excellent condition for us). However, on skis Mugs may have made it pretty fast, sadly he's not around anymore to ask. For Jon and myself it was our first time on the south face, but i have a feeling (could be wrong??) that Mugs had climbed the Cassin once before. All these changeable factors are what make the 20 mins improvement seem to me even less significant!
I don't know a great deal about history of other fast ascents of this route. From speaking to people who know their Alaskan climbing history, i believe it has been single pushed a handful of times, or maybe less. The only real attempt to beat the record that i know of was last year by Colin Haley and Bjorn Eivind Artun, who made it from the bottom to the summit of Denali (Stump and Jon and myself didn't do the final stroll to the true summit) in 17 hours something. I think Colin and Bjorn Eivind had a hard time of it with conditions. And i expect Colin and Nils Nielson will smash the record in the next week or so.
Anyways, just thought i'd put the record straight. (no pun intended, seriously....)
﻿﻿
Posted by Will Sim at 11:59 PM 1 comment:

Out of the mountains.

Just a quick update. We managed to escape a stormy central Alaska range yesterday at about midday, just making it out of the mountains before all the ski-planes were grounded. Snaking out of the range following the Kahiltna glacier bairly a couple hundred metres above it, watching the ground get greener and warmer was fitting closure to the cold and stormy three and a half weeks we spent on the mountain.
Unfortunately we gave up on our main objective (which we should be on now) after the weather kept deteriorating and the south east flow brought in one low after another. We did however get up to some good climbing on Denali, including breaking the 1991 Mugs Stump record on the Cassin ridge (just!), which was an unexpected but pleasant aspect of the trip. It was also great to just climb this uber alpine test-piece, which is arguably one of the most famous alpine routes in the world. And rightly so.
So for the time being, Jon, myself and our friends Magnus and Andreas (who were out with us skiing,  Andreas making perhaps one of the most audacious extreme skiing descents of recent times....)  are gonna head south for a few days for some cragging, exploring and maybe some exploratory skiing in the Chugach. I'll write a full report with loads of sexy photos in the next week or so. 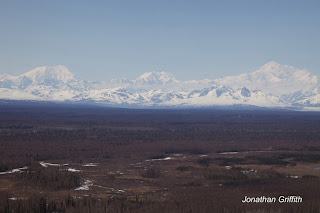 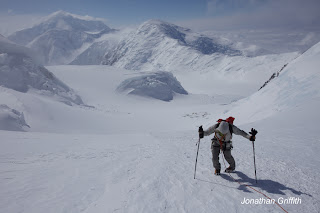