In the last week of March i spent a very interesting 5 days shadowing swiss based IFMGA guide Terry Ralphs and 4 clients on the classic Chamonix-Zermatt Haute route. Although i've now finished the initial induction year and am a little further down the long road to becoming a guide, this was the first time in my life i've been with paying clients in the mountains (albeit me observing, and Terry guiding). For me a few myths were dispelled and i got a good glympse in to the world of Ski guiding, which for nearly all IFMGA guides is a bread-winning aspect of the profession, especially in the Spring months.

For most the Haute route needs no introduction,  a 120km long ski, up and down hill from Chamonix in France to Zermatt in Switzerland, covering over 8000 metres of ascent along the way. For many avid ski tourers its the "jewel in the crown" of Alpine tours.

Despite bad weather on all but one day, and very high avalanche risk on all the days, we made it to Zermatt, and i was mega impressed when Terry made the call to bang out the last - crux - day when nearly everyone else was escaping to Arolla with a nasty forecast, commitment!

So myths dispelled...... Perhaps the part of the week i was most looking forward to was meeting the clients. I really wanted to know what kind of people go on long guided ski tours; what motivates them to go ski touring? what do they want to learn? how good a skiers are they? how fit are they? what do they do for the other 51 weeks of the year? But also i was really looking forward to seeing them out of their comfort zones, a little scared, completely knackered, having to dig deep and question whether they're enjoying it. Basically all the stuff which as commited climbers we accept as being fundamental parts of the "pleasure", but things which relative newcomers to the mountains may find offputting and unexpected.
I think all my questions had been answered by the time we reached Zermatt after 5 days of poor weather and hard conditions.

Experience? i worked out that all four of them had clipped in to bindings before i was born, but touring and mountain experience was lacking (although i should watch what i say as one of them had been up Everest!). 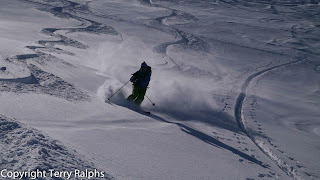 How fit? i was very impressed by the fitness of our clients, they were consistently solid at a pace which although slow, was in my opinion impressive when you only do it one week a year. However, any time gained through fitness was rapidly cancelled out by faff, never underestimate the faff factor!

What do they want to learn? This i found fascinating. At one point a client told me that he had got annoyed when a guide in the past had tried to teach him some skills, "Why?" i replied with confused interest, "i don't want to learn how to do it, that's why i pay a guide!" he replied. In the past i always thought that this kind of attitude would annoy me, but i actually think its kinda cool. He doesn't want to give up the time to learn to be self sufficient, nor does he feel the experience would be worth anything more if he was, therefore why bother? simple, and i can respect that.

Did they suffer? Yes and no. Not half as much as i thought they may have given the bad weather, but battling a strong head wind in a blizzard on the Glacier du Tour took its toll, and everyone looked very battered by the time we rolled in to the Trient hut.

Did they get scared? Interestingly not half as much as i was expecting. I think being completely inexperienced in the mountains means you haven't yet developed your danger sensors. So at times when i would have seriously loud alarm bells ringing in my head, a client could still be plodding away in their bubble of blissful ignorance, a bubble that they have rightfully earned by employing a guide.

All in all it was a very positive week, which ended with me feeling more psyched than ever for the future. Thanks Terry for having me along and thanks Camilla, Paul, Simon and Mike for being a chilled set of clients who put up with my endless talking about climbing...

Its been a weird winter for me, it feels like i haven't really achieved anything in the 8 months since getting back from Pakistan. All i've been doing is jumping through hoops and earning the money to allow me to do so. I just keep telling myself that if this year goes smoothly then that'll be it, i'll be an "aspirant" (meaning i can work in the alps and the end is in sight), and i can be back to being cold, scared and hungry on amazing mountains in crazy places, can't wait!